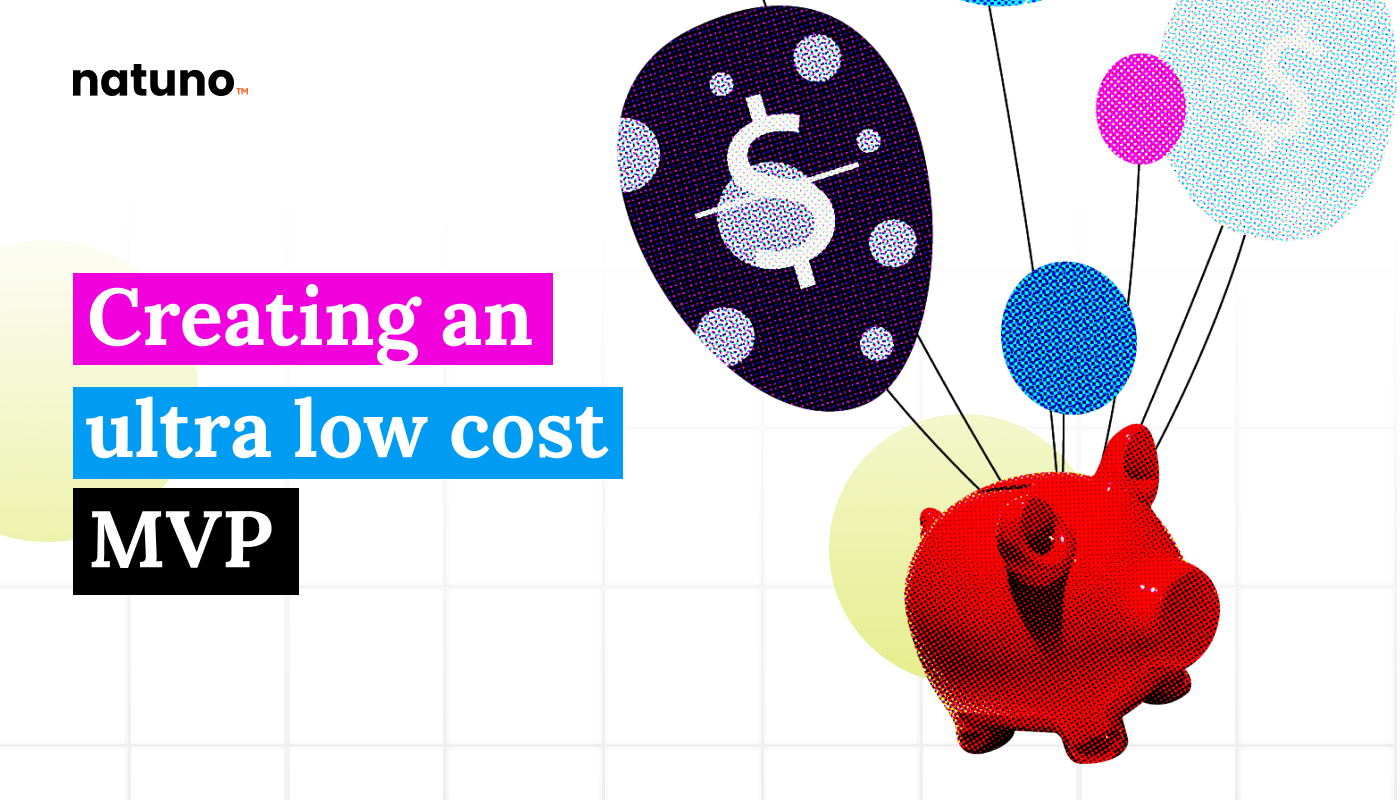 You might think that in order to test your product to users, you must first spend a lot of money to build an MVP (minimum viable product) in the form of a fully functional website or app.

However, that’s not really what an MVP is. We once worked with a client that developed an $$$ (re:expensive) MVP only to discover that their concept was terrible. Therefore, we think that the mindset of developing an MVP needs to change.

Let’s begin with what building an MVP should look like

What an MVP is not → You build a fancy complete product that meets all of your requirements first, then test your idea with users later.

What an MVP should be → You focus on the core idea of your product that you believe will solve the users' needs (it could be only one), create an MVP around it, and test and validate your idea with real users.

Purpose of an MVP

To put it simply, an MVP is a simplified version of a fully functional product that is intended to prove the viability of your concept and gather user feedback.

With the right MVP mindset, you don’t really need to waste a lot of money and time on something you're not entirely certain will work well. Instead, you can ensure that every penny you spend is worth it as you're on the right track.

What Are the Three Elements of MVP?

An MVP should at least consist of these 3 elements, which come from the MVP (Minimum Viable Product) itself:

Minimum Viable: It has enough value and caters to the users' demands from the beginning.

Viable Product: A product that provides solutions to the users’ problems.

These three components make up an MVP, which is a simple product with core functionality that can answer customer needs.

Remember that behind every glossy product, the most important thing is actually the idea behind it. People won’t stay long enough to use your product if it does not meet their needs. But if your product is really useful in solving their problems, they will use it voluntarily.

Research by CBI Insights shows that among the reasons why startups fail, 42% of them are caused by a lack of market needs. Many just create something that they want or they think it’s a good idea, without really thinking if it’s something people need.

So before you start making anything, make sure you conduct a proper research market to answer these questions:

What do your target users need?

What kinds of problems do you want to solve using your product?

Does your product provide what users need and expect from it?

Focus only on must-have features

Now that you have evidence based on research that your proposed idea is something useful, you may list down the features you would like to have in your product as they are needed by customers.

However, you need to divide all these features, for example, into 3 categories: must-haves (core features), should-haves, and wish-to-haves.

For the first MVP, focus on your core feature, make an MVP around it, and test it with users to see whether it really works. Once you have proven that your core idea really works, you may later develop the other features, just like these donuts.

Amazon, the now-huge-commerce company, began with a simple MVP. What they tried to achieve back then was to see whether there was a demand for people to buy something online.

They began their journey with only one thing in mind: to sell books. Their MVP consisted of a website with a list of books. So when customers wanted to order the books, they filled out the form on the website, and the Amazon team would physically buy the book from the distributor and send it to the customers.

Make use of low cost tools

An MVP's main objective is to test your idea rather than to launch a final product as soon as possible. So again, you're not required to create a sophisticated website or app right away.

Take an example from Dropbox, which had an idea to create online storage for files. They began with a simple explanation video that was released on HackerNews and demonstrated how it would operate and what features it would offer.

Overnight, the number of signups increased from 5,000 to 75,000 after the video was posted. From this number, Dropbox was able to determine that there is a significant demand for this product.

At Natuno, we’ve also helped a project where we utilized Google Spreadsheets to test the idea. At that time, to test the demand for a financial planning service,we asked the target users to send their monthly expense list to be organized by our client, or the company that offers the service.‍

Appeal to a small sample of users

No matter how many, starting to test your product with actual users and gathering feedback from them is the most crucial step at the MVP stage. At first, you can focus only on a specific demographic, just like what Airbnb did with their first MVP.

The founders of Airbnb discovered a problem: it was challenging to book a hotel room in a city that routinely hosts sold-out conferences. While this is going on, nearby residents might have a room in their home that is available for rent.

So they began with a basic website and only targeted one specific demographic: tech conference attendees at a sold-out conference, to test their concepts and determine whether a sufficient number of people were willing to rent a room in a local person's home.‍

Set a clear deadline and goals for your MVP development

There could be a tendency to keep improving your MVP, until it becomes perfect.  If you're not careful, this could cause the MVP development to take years and cost a lot of money before users even get a chance to try it. To avoid this, it’s better to time box your MVP development, launch your MVP, get feedback from users, and iterate it afterwards.

Mistakes to Avoid While Building an MVP

Surprisingly, it’s one of the most common mistakes that happen out there. Keep in mind that the purpose of your product is to address a need in a certain market. Do not believe too much on your own  assumption, as they are not always reliable.

An example of a startup which shut down 6 months after its launch due to the lack of market research is Quibli, a short video streaming app (like Netflix, but make it bite-sized). Despite being able to raise almost $2 billion funding, it failed to attract subscribers.

However, the core idea wasn’t compelling enough for users, as they have to pay $4.99/month for bite-sized original content, while they can get free short entertainment from apps like TikTok and YouTube.

Forcing that your very first MVP should be perfect with many features can actually bring you harm. Not only will it cost a lot of money, it will also confuse users about what your product is about. They may lose focus on the core of your product and therefore give inaccurate feedback.

It’s true that the whole point of creating an MVP is so that you can get user feedback for your product. However, you should also realize that it’s impossible to implement every piece of feedback and please everyone. Following all feedback may pull your development in different directions.

To avoid this, you can list all the feedback and then group the ones with similar ideas. Then make a priority list and discuss with the team to decide which reports and requests you should deal with first, considering the importance, cost, and time.

A lot of effort must be put into creating a minimal viable product, including conducting extensive research. However, there are still certain things you can do to keep the process more simple and budget friendly.

Have a project in mind?
Call Us!

Start a ProjectSee our Works

Help you figure out how to approach your problems.

Get timeline and cost estimation for your projects.
Mobile Apps